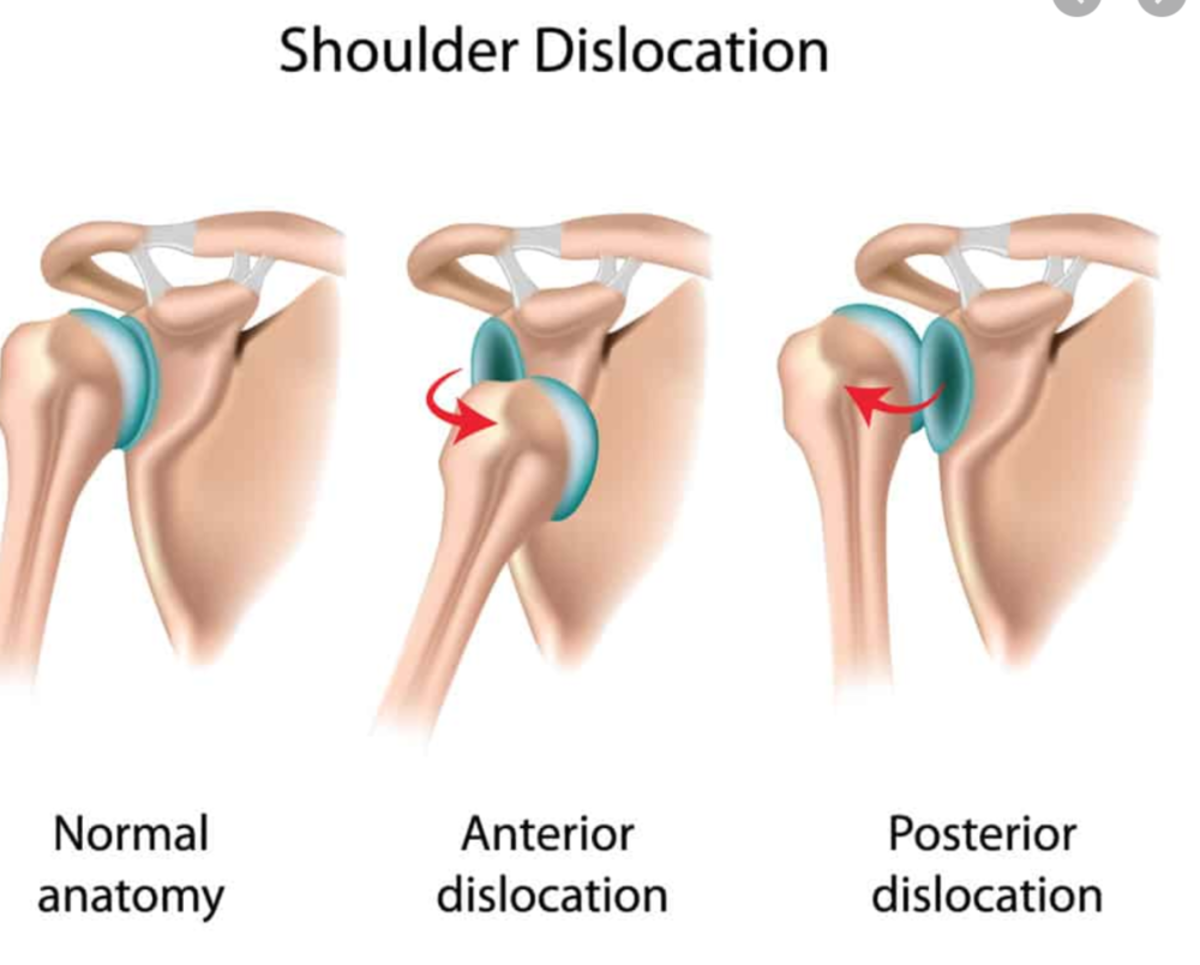 Shoulder dislocation is a very common traumatic injury across a wide range of sports. In most cases, the head of the humerus (upper arm bone) is forced forwards when the arm is turned outwards (externally rotated) and held out to the side (abducted). This causes an anterior dislocation, which make up approximately 95% of all shoulder dislocations.

Anterior (forward) - Over 95% of shoulder dislocation cases are forward. Most anterior dislocations are sub-coracoid. Sub-glenoid; subclavicular; and, very rarely, intrathoracic or retroperitoneal dislocations may occur. It can result in damage to the axillary artery and nerves around the shoulder.

Inferior (downward) - Inferior dislocation is the least likely form, occurring in less than 1% of all shoulder dislocation cases. This condition is also called luxatio erecta because the arm appears to be permanently held upward or behind the head.It is caused by a hyper abduction of the arm that forces the humeral head against the acromion. Inferior dislocations have a high complication rate as many vascular, neurological, tendon, and ligament injuries are likely to occur from this kind of dislocation.

Dislocations in younger people tend to arise from trauma and are often associated with sports or falls. Older patients are prone to dislocations because of gradually weakening of the ligaments and cartilage that supports the shoulder.

Posterior dislocations are uncommon and are often associated with specific injuries like lightning strikes, electrical injuries, and seizures. On occasion, this type of dislocation can occur with minimal injury in the elderly, and often the diagnosis is missed in this case.

There is a strong likelihood that you will need some rehabilitation to help you regain both the function of the shoulder, and to prevent it from dislocating again. Some cases may even require surgery if the shoulder is regularly dislocating, or if there is an associated fracture. Generally dislocations are reduced under anaesthetic. After the reduction you will be advised to wear a sling to rest and immobilise the shoulder for about 2 weeks. If there are complications such as fractures or soft tissue damage, you may need additional treatment and longer immobilisation. medication is necessary to control pain and swelling. After the period of initial immobilisation you need physiotherapy to regain movement and to strengthen the rotator cuff muscles which support the shoulder joint to prevent reoccurrences.

Surgery is sometimes necessary following a shoulder dislocation if there has been extensive damage to muscles, tendons, nerves, blood vessels or the labrum. Surgery is then usually performed as soon as possible after the injury. In cases of recurrent shoulder dislocations, surgery may be offered in an attempt to stabilise the joint. There are a number of procedures which can be performed. The procedure can be either a key hole surgery or an open technique. In both the principle of surgery remains the same, i.e. re-attaching the torn labrum back to the rim of the bony socket . Usually tiny screws called ‘anchors’ are used to achieve this suture. Well done procedure either open or arthroscopc should give good result to the patient by preventing any further dislocations.

‘Stability’ is important in the leg, and ‘Mobility’ is important for the hand (upper limb). Shoulder joint has the highest freedom of movement. But when a patient is afraid of the very movement for which the shoulder is known, due to the fear of that joint getting dislocated, he or she lost the very basic function of that joint. Yet young people who suffer from repeated dislocations of this joint tend to neglect and leave it for long which results in structural damage to the bones of the joint which is not reversible. So please seek advice at least after the second dislocation.

Disclaimer: The articles/blogs/write-ups uploaded in this Virtual Practice are copyrighted property of Dr. mohan krishna A and/or its associated team users. Copying, reproducing, modifying or disseminating the posts (in whole or part) in any form, media, or technology now known or later developed, including for promotional and/or commercial purposes, and to authorize others to do so, is strictly prohibited.